Published May 2011, by Livingston Press.

Available at bookstores, On Amazon and other E-tail outlets

"a truly fascinating and worthwhile book"

"The real star here is the haunted, haunting theme park full of crumbling temples, decrepit mangers and mazes of limbless, decapitated saints and Christs--a metaphor for the religious wasteland of the twenty-first century and a complex character in its own right."

"A profound and thought-provoking read." 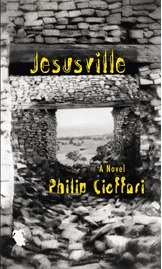 ​When Joshua Farley—a cult figure searching for an hallucinogenic plant rumored to allow the user to see God—disappears under mysterious circumstances, his disciples gather in the New Mexico desert to await his return. But they aren’t the only ones looking for him and the legendary plant. Other desperate people have also made the trek to this remote section of the world:a disillusioned journalist hoping to restore his lost faith; a small-time hood on the lam from the mob; Farley’s disinherited son; a teenage sexpot who claims to be Farley’s mistress; and a gang of mobsters come to even an old score. They meet in a darkly comic, twenty-first century equivalent of Judgment Day.

Author’s Take on Jesusville: Most of the characters here, in one form or another, have lost faith—in themselves, in God, the Church, or the social order—and so are searching to reclaim what has been taken from them. I wanted to depict the emptiness at the heart of each of them, and the struggle for meaning that results. As their frustration mounts, they turn to more desperate measures and that desperation exposes their vulnerability, their need for redemption, and ultimately their humanity. What better place than the desert to serve as the setting for man’s isolation and seeming inconsequentiality in the face of the universe.

This is a lonely stretch of desert: a wide basin of grey silt, sage and mesquite, forty miles of nothingness between the San Lorenzo Mountains on the west and Apache land to the east. An hour’s drive to the nearest blacktop, two before you’ll hit the Interstate.

No towns here. What you’ll find is an occasional outpost like the one at Indian Point: a cluster of buildings, weathered, flat-roofed, a sagging gas pump out front of the general store, its plate-glass window obscured by beer signs, and next to the store— knocked sideways into permanent slant by the wind—a shed that sold, or had for sale, second-hand tires and automotive parts. Your car breaks down, might as well forget it. Start walking back to wherever it is you come from.

Takes its name not from the Catholic sanctuary at the Refuge of Good Hope nor from the remnants of the now-defunct Holy Land theme park—not even from the Apaches who have come for centuries, once openly and now secretly, to worship their ancestors—but from Joshua Farley, a retired teacher from New York, who came out to “commune with the Lord Jesus.” He dedicated his life -‘till he vanished last year without a trace—to search for a rare species of the sage plant, rumored to grow wild in the hidden canyons of the San Lorenzo’s. The leaves of the plant, according to legend, induce an ecstatic state, thrust you face to face with the living God.

Here the sun beats from skies of the purest blue. In the radiance of day, under its glorious and constant stare, you might believe all things possible, that there is benevolence in the design of the universe. Nights, though. . . nights you lose your faith. Wind tears the surface from moonscapes of sand and rock. Time and space and self dissolve. Darkness unbroken. Darkness so long, so full of eternity, you’d swear morning’s never going to come.

The priest was still awake—another restless night—when he heard banging on the front door. The clock on his nightstand read 3:15.

He sat on the edge of the bed, thinking his disordered mind must have imagined the sound. Then he heard it again: a slow knocking, the delayed cadence of a tolling bell, rising sharply above the rush of wind. Surely that was no human hand upon the door. Too slow, too unhurried. Not the hand of a traveler seeking refuge from a storm. He wrapped his robe around him and stepped into a hall that led to the common room with its high, beamed ceilings and Spanish oak furnishings. From here it was obvious the sound came not from the front door but from the hill behind the Refuge.

At the window he looked beyond the garden and the walled enclosure. The grotesque facades of Holy Land lifted above the cottonwood trees. He thought a shutter must be hanging loose. Then the banging ceased though the wind persisted, the shutter perhaps broken free, afloat somewhere in the desert air. He would be happy if the entire park blew away. How many times had he petitioned the governor’s office to dismantle it? It was an embarrassment, a nuisance, an abomination.

Inside his room he tried to calm himself but nature’s breath came vicious and snarling against the adobe walls of the building. It hissed in the leaves of the cottonwood trees. For a moment he thought he heard it in the house as well, moving with an intruder’s stealth through the halls and empty spaces. Or was it something else?

​Don’t tell me you believe in spirits now, a voice inside his head chided. That’s sacrilege, remember? You’re a man of God. But surely he thought, as he had thought before in his weakest moments, there was every reason to believe this place he lived in was haunted—all those disturbed souls who had passed through here. Yes, they were gone now, the Refuge no longer a rehab center for troubled priests, but they had been here, lived in these rooms, walked these grounds. Surely they had left some of themselves behind: their tainted desires and unsettling urges, their nightmares. That was why he couldn’t sleep. The very air was poisoned.

He had settled back in bed when the banging came again and this time he was sure it was the front door. Twenty-five past three. His new guests weren’t scheduled to arrive for hours yet. He thought perhaps it might be a Farley disciple who’d lost his way. But that was unlikely. The encampment was miles from here, on the far side of the basin. The knocking continued: four or five insistent blows in quick succession.

Pulling his robe tightly around him, he crossed the common room and stood at the heavy oak door. It wasn’t fear that made him hesitate before throwing it open—he had long since lost any fear for his personal safety—but rather the anticipation of an obligation, what might be asked of him. He’d come to believe he had nothing left to give.

The night assaulted him, cold and raw.

The man who stood before him cowered against the wind. Even standing under the porch he had to raise his arm to protect his face and eyes from the biting sand.

“Hell of a night, Father,” he said with a wry grin. He wore a thin leather jacket and jeans and a pair of square-toed riding boots. With his wind-blown hair, his unshaven face, he looked like someone fallen on hard times, a drifter maybe, or someone on the run.

The priest folded his arms against the chill. He squinted into the mist of sand and darkness for a look at the car parked outside the gate. A dark coupe. Apparently unoccupied. At this distance he couldn’t read the plates. “We don’t normally—we like to have advance—”

“I know, Father, I know. Real sorry to come like this, middle of the night, waking you up. Real sorry, you know? But you see—” He shifted his feet, shoved his hands into his jeans as if to contain his energy, keep it under control. His eyes flared wide and bright in their sockets. “Circumstances, you see? This storm, you see? Things got a little crazy. Got my timing a little screwed up, knocked things off-kilter.” He forced a smile. “See what I mean, Father?”

“What kind of trouble are you in, son?”

“No trouble, Father. Just need a place to stay.” He moved directly under the porch light and offered his hand, his smile broad and white, a playful glimmer in the wild dark of his eyes. He was a good-looking man and he knew how to use that. “Name’s Dillon. Joseph F.X. Dillon. That’s for Francis Xavier. My mother was one of the Saint’s biggest fans.”

​The priest feigned a coughing spell to give himself more time. The Refuge had been officially closed for several months now. It was still open to guests, but on a limited basis: parish priests who needed a few days’ rest, members of the laity in search of a spiritual retreat. Both the priests and the laity were typically from the western dioceses, referred by bishops or other church dignitaries. “How did you hear about us?”

“Priest in Abilene. Can’t recall his name. Thought it might do me good, clear my head. Been kinda hectic lately.” “Is that where you’re from? Abilene?” “Just passing through.” Broad smile again—self-satisfied and self-congratulatory. It was charm the man was offering, not information.

​The wind rose again. The man on the porch shivered, turning his body against it and pushing his dark hair from his face. He was at least twenty or twenty-five years younger than the priest, about the same height, 5’10 or 5’11, but built sturdier—someone who had spent time in the weight room. Father Martin’s instincts were to deny him entrance. If he was not in trouble, he was trouble itself. Maybe even dangerous. Maybe that, too. There was something—he couldn’t quite identify it: his restlessness perhaps, the hard edge to the energy he gave off—something disturbing about him. But seeing him small and diminished in the wind’s fury, hunched against the backdrop of the desert night, he ignored his reservations, his better judgment. This was a refuge, after all. And he had always been drawn to those in need.